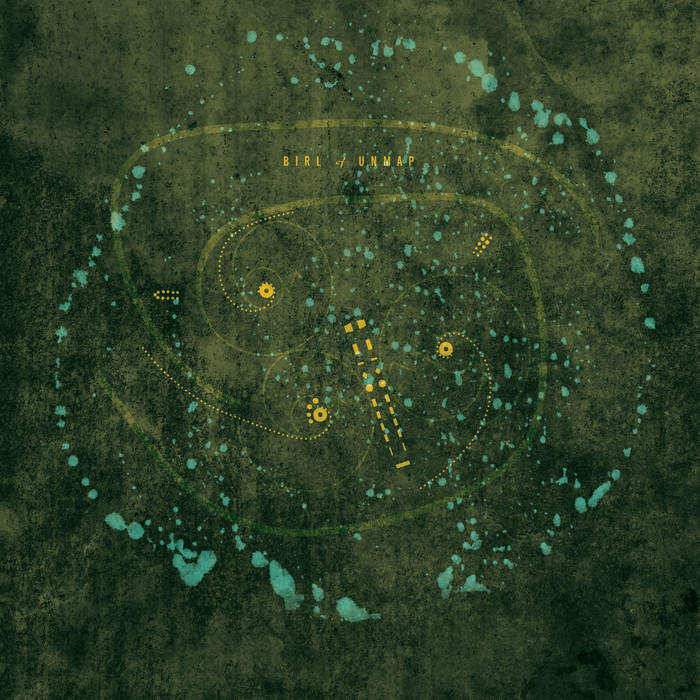 polinos Totally magic exploration of a locality in Scotland through time and (sonic) space using spoken words, poetry and inventive post classical drones, eventually expanding from the very local to the cosmic. It's hard to explain the spell this record casts, but if you've listened to it once, you won't forget it.

Full Spectrum and The Dark Outside are pleased to present ‘Birl of Unmap,’ the first collaborative album from Kinbrae – the project of twin brothers Mike and Andy Truscott – and writer / artist Clare Archibald. Hailing from the Kingdom of Fife in Scotland, the trio has forged a new practice in creative dialogue and sonic experimentation, exploring abstract notions of ‘place’ and deconstructing its innate rhythms and sonic totems.

For the unfamiliar, a bit of vocabulary context may be required – “birl” is a Scots word that means to spin or whirl.

To wit, ‘Birl of Unmap’ is an attempt to unravel the dynamic layers that make Fife an area of both artistic and physical interest, as well as interpreting something of the perceived language of the place. Sitting across the water from the cities of both Edinburgh and Dundee, yet also adjacent to the open North Sea, the Kingdom of Fife is both connected to the greater world and resolutely of itself. It can be reached from all directions by iconic bridges and yet is not an island, but such a landscape permits the existence of half-seen truths and spaces. ‘Birl of Unmap’ is a response to one such place – a place of several pasts and many names in West Fife that has existed as an open cast mine, the long gone pit village of Lassodie, and most recently as a not-quite-fully realised land art vision of the post-modern architect Charles Jencks.

Currently known as St. Ninians, the area in question has existed in a strange limbo between purpose and public access for many years, though it was sold in 2021 for redevelopment as an eco-wellness centre. ‘Birl of Unmap’ is the telling of a place from different times and perspectives, of the land, of the art that Jencks installed there using decommissioned mining machinery, of the idea of the Final Void in both mining and cosmic terms and of what it means to know, to share a place and pass on bits of it with space allowed for retelling. Infused with field recordings from the earth, water, air, and industrial installations on-site, the album seeks to give space to the energies of a place and the landscape legacies of human and more than human interactions with it.

Drawing on academic research, oral histories, and the experiences of other Fife-based artists, as well as former miners and residents of the site, ‘Birl of Unmap’ stands as more than the sum total of aesthetic tropes, embodying an ambitious call to consider how we balance our own experiences and understandings with those of others. This is an invitation to wander through the layers and perhaps find something more of ourselves within them.

Wee girl playing at the site who agreed to being recorded for Carbide Fizz (with parental permission).

This album was made possible by a Fusion Fund Award from Help Musicians UK.